There is a park along the Sonoma Coast that looks out over the Pacific Ocean on one side and peers up at a fog-blanketed redwood forest on the other. This park is known for its rich local cultural history, but natural history abounds here too.

Fort Ross State Historical Park tells the story of the Russian-American Company, which had a settlement in the area between 1812 and1841. The buildings are historic replicas that show what life was like during that time. You can visit the Officials’ Quarters, the Magazin, the Chapel and the Rotchev House, which is the only original structure and a National Historic Landmark. As visitors walk through the fort, learning about the Russian settlers, Native Alaskans and the Kashaya people, students also have special opportunities to learn about this rich history.

Hundreds of students visit Fort Ross every year, some for day trips and many for overnight trips, and they experience what life was like in the early 1800s. The students dress in character and take on roles as cooks, clerks, militia, hunters, or artisans. They have specific tasks to do throughout the day just as their characters would have had during that time. The overnight groups even have night watch and students take two-hour shifts throughout the evening to keep watch over the fort. These programs provide truly unique and memorable experiences for the students.

At Fort Ross, the cultural history of the area is tied closely to the local natural resources. The Russians were some of the first non-native people to use redwood trees. All of the buildings in the fort are made from redwood. Part of the Rotchev House has original redwood flooring and walls from the early 1800s. It is one of the oldest redwood structures still around today.

Redwoods played an important and interesting role in daily life while the Russians and Native Alaskans were at the fort. The League is currently working with park staff to incorporate more pre-logging redwood history into the parks’ interpretation. The hope is that this rich history can be shared with many parks and park visitors throughout California to further tell the story of the redwoods.

The next time you find yourself along the Sonoma Coast, stop in at Fort Ross and soak up all it has to offer. Make sure to touch the 200-year-old walls of the Rotchev House while looking east to the redwood forest where it originated. 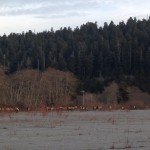 Our Turn to Help Elk

This week, we walked onto our Orick Mill property and were greeted by a large herd of Roosevelt elk. The League purchased this 125-acre property in the heart of the Prairie Creek Corridor a few years ago and are actively … Continued 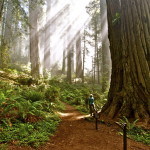 The Parks Forward Report officially adopted this morning is a great step toward a strong future for the California state park system. Having partnered with State Parks for much of our 97-year history, Save the Redwoods League is deeply invested … Continued