More than $200,000 in research grants from Save the Redwoods League in 2013 and 2014 will fund projects that will contribute to scientific knowledge of coast redwood and giant sequoia forests. This research can help us answer big questions that will protect the health of people, wildlife and redwood forests.

“Smart conservation requires more than land and habitat preservation,” said Emily Burns, former Director of Science at Save the Redwoods League. “With the threat of environmental changes, understanding what forests need to thrive is more vital than ever. Save the Redwoods League is proud to make new scientific discoveries possible through our annual research grants program.”

Since 1997, the League has awarded more than $1.36 million in research grants to fund studies that have provided the scientific community and public with valuable new information about

Knowledge gained from this research guides our conservation efforts and the work of land managers throughout the region.

2013 and 2014 Save the Redwoods League Research Grant Recipients

Mary Letourneau, of the University of California, Santa Cruz, received $14,107 to collect baseline information on how exotic plants beneath the redwood canopy disrupt the food web of native plant and insect species. This information will enable us to predict and recognize changes over time and compare redwood forest understory diversity with that of other types of forests.

Kevin O’Hara, of the University of California, Berkeley, and Lynn Webb, of the California Department of Forestry and Fire Protection, received $15,000 to research how climate change over the last 50 years has affected the seasonal growth of redwood forest cone-bearing trees. Their results will not only provide greater understanding of when during the year redwood and associated tree species grow, but will also enable predictions of how different species react to potential climate change in the future.

Richard Dodd, of the University of California, Berkeley, received $15,000 to study the pollen and seed dispersal of giant sequoias to determine the driving forces behind the genetic diversity within groves. His research will help to determine how planting practices can maximize redwood forest growth and diversity.

Claire Willing, of the University of California, Berkeley, received $13,444 to explore the effects of climate gradients, particularly moisture, on mycorrhizal fungi in the coast redwoods, which extend root surface area in exchange for nutrients produced by the trees. These fungi are one of the least-understood parts of the redwood forest. This research will provide insight into the interactions among organisms and their environment below the forest floor, with potential implications for restoration practices.

M. Zachariah Peery and R. William Henry, of the University of Wisconsin Department of Forest and Wildlife Ecology, received $29,662 to study changes in Steller’s jay populations, and the birds’ implications for marbled murrelet conservation. The study could help develop ways to manage these jays, which feed on imperiled marbled murrelet eggs and nestlings.

Justin Garwood, of the California Department of Fish and Game, received $29,600 to study the migration, growth and survival of juvenile coho salmon in Mill Creek area waterways in Del Norte Coast Redwoods State Park. The findings will be used to test the effectiveness of ongoing habitat restoration products in this area and inform future restoration planning.

Hart Welsh, of the USDA Forest Service’s Pacific Southwest Research Station, received $29,826 to study the food web dynamics of the Ensatina salamander. He will examine how the salamander’s role as a top predator in the redwood ecosystem affects its ability to influence the storage of carbon in redwood forest soil. This forest plays an important role in global carbon dioxide reduction.

Andrew Zink and Vance Vredenburg, of San Francisco State University, received $14,968 to research the role of communal salamander nesting in salamander disease in giant sequoia forests. The research will help protect an essential member of the redwood forest as well as inform conservation strategies to mitigate the spread of amphibian disease.

Tim Bean, of Humboldt State University, received $15,000 to clarify the best methods for detecting and surveying white-footed voles and convey a preliminary understanding of their habitat requirements. The white-footed vole is one of the rarest and least understood mammals in North America, and one of the only mammals endemic to the redwood forest.

Keith Slauson, of the USDA Forest Service’s Pacific Southwest Research Station, received $15,000 to study the effects on cavity-dependent mammals of installing artificial cavity structures like nest boxes in young, post-logging redwood forests. If successful, these surrogate cavity structures may be critical in supporting the survival and dispersal of at-risk animals such as the Humboldt marten.

Kevin O’Hara, of the University of California, Berkeley, and Lathrop Leonard, of California State Parks, received $15,000 to study the effectiveness of variable-density thinning (the selective removal of trees to make room for the growth of others) in coast redwood forests. The award also supports to a 10-year remeasurement of the Mill Creek restoration/thinning trial. The results will continue to guide efforts to accelerate the restoration of old-growth redwood forests in Mill Creek and beyond.

Save the Redwoods League invites researchers to apply for grants annually. Learn more about the research grants program. Don’t Forget: Donate Through Your IRA and Download the Free Family Guide

by Save the Redwoods League on December 6, 2013 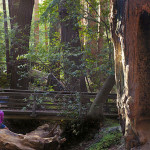 You Can Help Rebuild a Favorite Trail

Your thoughtful support enabled Save the Redwoods League to help create a temporary trail to beautiful Pfeiffer Falls in Pfeiffer Big Sur State Park after a fire cut off visitors from that popular destination. We still need your gifts to rebuild the permanent trail through the ancient forest. Learn more, do your part.