A Look Inside a Prescribed Fire

by Anthony Castaños and Laura Lalemand on July 5, 2019

Conservationists have long understood that fire is not only a natural occurrence in California wildlands, but also necessary for ecosystem health. This is particularly true for coast redwoods and giant sequoia that are adapted to regular wildfires of low to moderate severity. Such fires reduced fuels and kept tree densities low. The more open stands that were created by such regular wildfires are less susceptible to severe blazes and other forest stressors, fostering resilience to fire and climate change. Here at Save the Redwoods League, we understand that prescribed fires are a needed conservation tool to protect and maintain healthy ecosystems across California’s redwood range.

To that end, last week we organized our first-ever prescribed fire or “controlled burn.” Following weeks of preparation, we conducted the burn on a 20-acre prairie in Humboldt County. This area, known as the Corridor from the Redwoods to the Sea, connects Humboldt Redwoods State Park and the forests of the Lost Coast, an undeveloped area in Northern California’s Humboldt and Mendocino counties. The League holds a conservation easement on the corridor, and saw an opportunity to use prescribed burning to reintroduce fire to the landscape, control the non-native plant Medusahead, and increase native plant biodiversity. The original intent of the League’s involvement in the region was to establish a wildlife and protected lands corridor between the redwood forest and the Lost Coast. 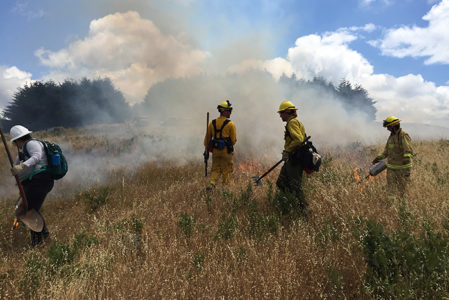 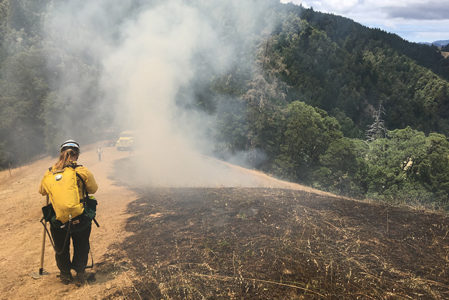 With concerns about fire in California at an all-time high, safety was a primary concern. In addition to the five volunteer fire departments on the scene, the California Department of Forestry and Fire Protection (CAL FIRE) also sent a crew and engine. The landowner had encircled the burn site with fire lines, which are gaps in combustible vegetation that slow or stop the progress of fire. On the day of the burn, holding crews ran fire hoses along the south end of the site to have on hand if needed. In addition, teams stood by to catch downwind embers, which didn’t materialize. In the end, the burn went perfectly.

This prescribed burn was a pilot project, the first of many more League-organized events to come. We will continue to work with our partners to identify where we can best use fire as a tool to reduce hazardous fuels, or buildups of combustible vegetation. This work will improve the health of our forests across League properties and the redwood range by reintroducing this important ecological process into our landscapes. Save the Redwoods League recently received funding from the CAL FIRE through the California Climate Investments program to perform prescribed burns on additional acreage in the Stansberry Ranch-Corridor region, as well as another 1,000 acres in Calaveras Big Trees State Park and our Beaver Creek property.