Why new infrastructure is worth the investment

Existing nowhere else on the planet, the primeval giant sequoia forests along the western slopes of the Sierra Nevada are almost mythical.

The ancient trees have graced the landscape for thousands of years, their elephantine, burnt-sienna trunks capturing the hearts of visitors whose concept of “huge” is forever changed.

Half of the 48,000 glorious acres of giant sequoia forests in California, including Giant Sequoia National Monument, are owned by the US Forest Service. Despite the groves’ significance, these magnificent places have limited recreational, educational, and interpretive infrastructure to support their hundreds of thousands of annual visitors.

Managing the monument is complicated—not only because of the sensitivity of the giant sequoia ecosystem, but also because of its location within Sequoia National Forest and the boundaries the monument shares with Sequoia and Kings Canyon National Parks, the Tule River Indian Tribe of California, and the Bureau of Land Management.

“Giant Sequoia National Monument is important to numerous local, regional, and statewide stakeholders,” said Paul Ringgold, the League’s Chief Program Officer. “Beginning to address the recreational and ecological needs of the monument at scale will require collaboration with a complex and diverse field of stakeholders, private landowners, and interest groups, each with their own unique concerns about this vast and iconic landscape.”

To begin tackling the Herculean task of improving forest management and the visitor experience, Save the Redwoods League funded the study, “Giant Sequoia National Monument Recreation Constraints and Opportunities Analysis,” completed in spring 2019 by the Sierra Nevada Research Institute of the University of California, Merced. The institute’s research supports natural resources and social health in the Sierra Nevada and related regions. The study helped us to better understand the lack of infrastructure, the needs of the monument, and perspectives of the surrounding communities.

Here’s what we know: When visitors flock to public lands, the gateway communities nearby benefit economically and culturally. In 2015, travel and tourism provided 55,100 jobs (16 percent of employment) in the giant sequoia region.

The Outdoor Industry Association reports that recreation brings in over $92 billion each year to California’s economy. Research has also shown that protecting and restoring public lands attracts tourists, new residents, and businesses to their gateway communities, while keeping property values high and bringing in new investment.

These numbers indicate that improving access to the monument and the visitor experience within it will be extremely valuable.

“There is so much untapped potential for both transformative visitor experiences and related community development around Giant Sequoia National Monument,” said Jessica Carter, the League’s Director of Parks and Public Engagement. “We are just beginning to talk with partners and contemplate strategies for approaching this in ways that are intentional and sustainable.”

The study evaluated accessibility and quality of trails and campgrounds in the monument. On the Trail of 100 Giants, visitors have harmed vegetation and caused erosion by veering off trail to get closer to the ancient trees. At some of the monument’s 19 campgrounds, visitors pitch tents directly beneath giant sequoia, affecting the trees’ root systems and overall health, as well as water quality in nearby streams. To restore the monument’s treasures that sustain us all, the League is committed to creating better infrastructure that will support visitors’ good intentions and inspire them to be great stewards.

In April 2001, Senator Dianne Feinstein verbally pledged government funds to help build a visitor center for the southern portion of the monument. However, the promise has remained in limbo, so local residents, businesses, and federal branches formed the South County Tourism Committee, which meets once a month for project planning. Tulare County schools and their students have been involved in the process. Internnect, a high school internship program, has supported students in developing a 10-year master plan for the visitor center site and surrounding area, including a nature trail and educational facilities. Students even built mockups and presented their plans to the US Army Corps of Engineers. This level of engagement demonstrates that the community is a major stakeholder in park infrastructure, protection of the natural environment, and environmental education.

VISION FOR THE FUTURE

The League plans to work with the US Forest Service to create an inspirational park experience in the monument, on the League’s Red Hill property, and on the Alder Creek property, which Save the Redwoods is raising funds to purchase. The League’s goal is to transfer both properties to the US Forest Service for permanent protection in five to 10 years; the parcels would be part of the monument. Because of the federal agency’s limited funds and resources, our stewardship and realization of a thoughtful public access plan are critical before transferring our land.

“The League’s pending acquisition of the Alder Creek property gives us the opportunity to think broadly about the area as well as to directly add to the breadth of visitor experiences in the monument, solidifying this special place as a destination all its own,” Carter said. “There is a real need to address basic recreational infrastructure throughout the monument, such as wayfinding, parking, and trails. This need is acute at the Trail of 100 Giants, one of the most popular visitor destinations. Early on, we also hope to introduce interpretation that inspires people,” Carter said.

Interpretive resources that spark transformational experiences among the giant sequoia, and encourage visitors to navigate the monument with respect for the plants, wildlife, and streams will be essential for protecting the forest. One of our highest priorities at Alder Creek will be improving access to and protection of the Stagg Tree, a giant sequoia which is believed to be the world’s fifth-largest tree.

“An exciting aspect of our deeper engagement in Giant Sequoia National Monument is introducing new people from Southern and Central California to these magical forests,” Carter said. “We are especially interested in learning from Central Valley communities about how best to cultivate meaningful access and support recreational and educational programs. Part of the League’s vision is to welcome park visitors that reflect the diversity of California’s population, and the monument is perfectly positioned to do just that.” 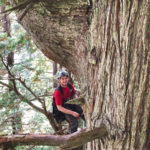 The Overstory By Richard Powers It’s no surprise that The Overstory won the 2019 Pulitzer Prize for Fiction, because this novel is magnificently written. The book is about forests, their grandeur, their importance, and their destruction. The blight that wiped … Continued