If the planet’s magic is contained in water, as scientist Loren Eiseley maintains, it also must be said that the magic is contained in the primeval forest. And there are few places where that sylvan enchantment is stronger than Red Hill, a 160-acre property along the South Fork of the Tule River, where scores of ancient giant sequoia tower above the rugged Sierra Nevada.

To explore this extraordinary place is to walk back in time, all the way to the Cretaceous period. Dinosaurs once foraged in Sequoiadendron forests; at Red Hill, we find one of the last places on Earth to gaze upon “the original face of nature,” as League founder John C. Merriam would say.

Red Hill shelters 110 ancient giant sequoia, by most assessments, the largest, oldest, and most magnificent trees in the surrounding area of Giant Sequoia National Monument.

Giant sequoia are the largest trees on Earth, but they are relatively few in number, scattered in about 73 groves along the western slopes of California’s Sierra Nevada. In total, they cover only about 48,000 acres, roughly the size of Cleveland, making every grove precious. In contrast to coast redwoods, which were easily accessible to the rapidly urbanizing communities of the San Francisco Bay Area, two-thirds of giant sequoia groves in the rural Sierra region were largely spared the magnitude of destructive, early logging. Most of the remaining giant sequoia groves have been protected as public parks and preserves.

About 1,200 acres of ancient giant sequoia remain in private hands, and their future protection is thus uncertain. And while the logging of any mature giant sequoia is unlikely today, the great trees, and the forests that surround and sustain them, remain vulnerable to development, wildfire, and climate change.

Faced with this fact, Save the Redwoods League has been working with willing landowners to ensure that the remaining ancient giant sequoia are protected. The League’s purchase and protection of Red Hill is our most recent—and one of our most important—achievements toward that end. An inholding in Giant Sequoia National Monument and Sequoia National Forest, Red Hill was acquired by the League from Michael Nicholas last June. The property shelters a staggering 110 ancient giant sequoia. These giants, the pristine South Fork of the Tule River, and the contiguous forest of mixed conifers combine to create a citadel of tranquility, seemingly a world and epoch away from the bustle and glitter of the Los Angeles basin, a four-hour drive southwest. This remote wonder is also critical habitat for a variety of imperiled species, including the Pacific fisher, the Sierra marten, the California spotted owl, the northern goshawk, and the mountain yellow-legged frog. Red Hill also is considered prime territory for the re-establishment of California condor populations.

“The Red Hill purchase will eliminate a key inholding in Giant Sequoia National Monument,” said Teresa Benson, Sequoia National Forest Supervisor. “In the next few years, the US Forest Service hopes to acquire the property from Save the Redwoods League with support from the Land and Water Conservation Fund, allowing public access and agency scientists and staffers greater flexibility in managing for the protection and restoration of giant sequoia forests. The project will also reduce Forest Service costs associated with boundary management and oversight of Giant Sequoia National Monument.”

Thanks to a generous challenge to match all gifts, the League raised over $4 million for the purchase and stewardship of Red Hill. The funds raised supported the $3.3 million purchase price and the estimated $700,000 for project costs and stewardship activities to enhance forest conditions and climate and fire resilience on the property. More than 3,100 League members from across the country contributed to the effort, along with significant grants from individuals and local and regional foundations including The Joseph & Vera Long Foundation, Jerry Martin, The Summer Hill Foundation, the Ted Martin Legacy Fund at the Central Valley Community Foundation, The Conservation Alliance, and the Flora L. Thornton Foundation.

Before the League’s purchase, Red Hill had been in the Nicholas family since the 1970s. The family managed the undeveloped property with care, thinning trees to reduce wildfire risk and sustain the value of the property.

“Save the Redwoods League shares a lot of my family’s same interests as far as protecting the land and ensuring this resource is going to carry on and be a treasure not only for this generation, but also for future generations,” said Nicholas. “I feel like the League’s purchase is a real win-win situation for all of us. The trees that my mother, Isabelle Nicholas, protected will live on.”

Red Hill’s protection will yield significant public benefits. After the League transfers the property, the Forest Service is expected to open the property to the public by 2021, complementing the outstanding experiences that are available in the surrounding area. Giant Sequoia National Monument showcases nearly half of the giant sequoia groves in the world, and offers unforgettable hiking, backpacking, fishing, horseback riding, rock climbing, scenic drives, nature photography, caving, birding, mountain biking, kayaking, rafting, and cross-country skiing and snowshoeing.

Benson said Red Hill’s inclusion in the monument will strengthen the ecological resilience of the entire region because of its mature giant sequoia and habitat for numerous imperiled species.

“The League and the US Forest Service have been longtime allies and partners, and we consider Red Hill one of our most important giant sequoia conservation efforts to date,” Benson said.

Red Hill is also a bulwark in the hydrological stability of the region. The South Fork Tule River watershed drains westward through the Tule River Indian Reservation, finally entering California’s San Joaquin Valley. It provides water for the tribe and numerous communities along its course, and ultimately to the people and hundreds of farms in the Central Valley.

A Site for Scientific Study

Red Hill also will function as a living laboratory for scientists studying the carbon sequestration potential of mature forests. Trees capture carbon from the air and store it as wood; forests are thus an essential tool for mitigating climate change. Unfortunately, drought and wildfire have ravaged Sierra Nevada forests, greatly reducing their potential as carbon sinks.

“More than 102 million trees—mostly pines—were killed in California by a combination of the recent drought, bark beetles, and fire suppression, which for decades has led to high tree density and intensified competition for water,” said Emily Burns, League Director of Science. “Eighty percent of the trees lost were in the Sierra Nevada. Research indicates that a critical solution to protect Sierra forests is to thin stands where tree density is unnaturally high and restore fire as a critical ecosystem process.”

Giant sequoia forests have faced pervasive fire suppression over the past century and suffer from the lack of frequent low-intensity fires that are necessary for reproduction. Before and after the transfer, the Red Hill project will help provide a model for progressive management of fuels (buildups of combustible vegetation) throughout Giant Sequoia National Monument, improving forest resistance to devastating wildfire. The project will also conform to the monument’s management plan, which emphasizes the consolidation of key inholdings and actions to promote recovery of the California spotted owl and other special-status plant and animal species.

Finally, the protection of Red Hill brings Save the Redwoods League and allies one step closer toward the implementation of their vision for giant sequoia conservation: to protect the last remaining ancient giant sequoia and advance stewardship—including the strategic use of fuels management and prescribed fire—that will ensure the natural function of the ecosystem into the future.

“Red Hill is one of the great natural gems of the Sierra Nevada, and this purchase and ultimate transfer will ensure its protection forever,” said League President Sam Hodder. “We’re thankful to the many individuals and foundation partners who care passionately about redwoods and donated to help us protect this important grove. We also acknowledge the commitment of the Nicholas family for carefully managing this stunning forest. This is a project of tremendous significance, bringing us closer to fulfilling the League’s Centennial Vision of protecting the remaining viable old-growth giant sequoia and coast redwood forests. The future of giant sequoia depends on what we do now—and protecting Red Hill is a giant step in the right direction.”

See a video, fun facts, and FAQs about Red Hill. 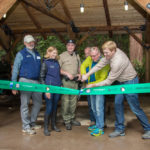 Home of some of the tallest and most extraordinary trees in the Santa Cruz Mountains, Portola Redwoods State Park provides visitors with a much-needed escape from life in nearby Silicon Valley.