On my first day as a field botanist in Yosemite National Park, the fire ecologist Kristen Shive, now Director of Science at Save the Redwoods League, was out training us on field protocols for the season. Although it was a dream come true, I had planned for this to be one last field season for fun before I switched gears and went back to school for occupational therapy. While we were taking our measurements, I rattled off an obscure plant fact and Kristen gave me a funny look and said, “No one else remembers these random plant facts except for you. You might want to rethink your plans for occupational therapy!”

In that moment, it really hit me—I really loved this work and could turn it into a career. I turned down my acceptance to graduate school in Sweden to study botany and instead decided to stay in Yosemite and continue to learn more about ecosystems, wildfire, and most importantly, giant sequoia. In the years that followed, I worked for Yosemite as an ecologist and a wildland firefighter, working on postfire field data collection, prescribed burns, and wildfires in giant sequoia and other forest types. This experience drew me to the Giant Sequoia Forest Fellow position at the League.

My first recollection of understanding my namesake, the Swedish botanist Carl Linnaeus, and learning how to key plants was in Yosemite on our yearly family camping trip to various national parks. My dad, an immigrant, was adamant his kids would see the natural wonders of the United States. My passion for giant sequoia really developed at an early age during a trip to Sequoia National Park. I remember my dad saying, “OK, you guys, giant sequoia are really big trees. You’re not going to be able to fathom how big they are, but you’ll know a sequoia when you see it.”

As we drove up Generals Highway, we kept asking, “Hey, dad, is that a sequoia?” And he would say, “No, that’s a ponderosa pine.” Then we finally got into the Giant Forest, and there it was, the first sequoia. I was absolutely blown away. For the rest of the trip we pointed out every single giant sequoia. “Dad, look, there’s another sequoia! And another sequoia, dad! Sequoia, sequoia, sequoia!!” Our dad was right, we truly couldn’t fathom just how big and majestic they were. Now whenever I drive or hike through a grove, I still whisper to myself, “Sequoia, sequoia, sequoia.” And I remember that feeling from when I was little and the first time I saw a monarch.

Last year as a wildland firefighter, I returned to Sequoia National Park to work on a prescribed burn in the Giant Forest and was excited to be working in the place where I first developed my appreciation for giant sequoia. While we were burning, there were dogwoods and leopard lilies still blooming in July and monarch giant sequoia towering above us. The smoke shrouded the forest and I looked up to recognize the tangible beauty of fire burning at the base of these giants that rely on fire to regenerate. I told the crew to stop and look around to truly understand what we were doing. I was struck by what an honor it was to be putting fire on the ground under these thousand-year-old monarchs to restore this ecosystem and have direct, positive impacts on these old giants. Now that I work for the League, being able to continue work that is advantageous to that ecosystem is really rewarding, and the need for this type of work has been a long time coming.

As long ago as the mid-20th century, Western conservationists started to recognize that California forest ecosystems, particularly in the Sierra Nevada, needed fire. Obviously, this was already known by Indigenous peoples, who had been tending to sequoia groves long before European Americans got here. It wasn’t until the 1960s that modern fire ecology was established by pioneers who set the first prescribed fire in Redwood Mountain Grove. The researchers found that sequoia are a fire-dependent species with serotinous cones, meaning they open to release seeds after exposure to certain conditions—in this case, the radiant heat of a fire. The scientific community also began to recognize that fire is advantageous to the landscape because frequent low- to moderate-severity fire reduces fuels (combustible vegetation) and can help to prevent future high-severity wildfires, especially in an ecosystem like this where low- to moderate-severity wildfire was once as frequent as every 10 to 20 years.

Beginning in the 1970s, Yosemite and Sequoia and Kings Canyon National Parks started to restore fire to the landscape by lighting prescribed fires and allowing fires in remote areas to burn when the conditions were right. When forest managers in these parks started managing lightning-ignited wildfires to benefit resources in the early ’70s, they started to see that fire acts as a puzzle. Older fires appear to limit the spread of newer fires by keeping the fuels in check. You can look at the footprints of the older fires and see how newer fires are limited by the past fires—the footprints appear to fit together like pieces of a puzzle. Although we have understood the need for fire for a long time, most areas across the state still have not been able to restore fire to fire-adapted landscapes.

So far this year, the SQF Complex Fire, which is burning within Giant Sequoia National Monument, has burned over 15,000 acres of giant sequoia, including parts of 15 groves. It was a lightning-caused fire, the type that would have historically been good for the landscape. The problem is that we have a huge amount of fuel buildup in the Sierra due to fire exclusion for the last century, and climate change is exacerbating fire behavior. We saw in 2017 in the Pier Fire in Black Mountain Grove and the Railroad Fire in Nelder Grove that many monarch sequoia were torched and killed outright—that is not normal for monarchs, indicating that giant sequoia mortality was higher than in previous years. We have not yet been able to document the mortality this year, but our data from 2017 indicates that giant sequoia mortality from fire can be much higher than previously expected.

In general, among the public there’s still a mindset that fire is “bad” and needs to be suppressed right away. This is compounded by inadequate funding on federal lands for fuels work, as well as increasing impacts of climate change. The result is a negative feedback cycle in which decades of fire exclusion, unprecedented wind events, and sustained hot, dry conditions fuel catastrophic wildfire that, in some cases, causes significant losses of ancient trees. These wildfires lead to unnaturally large areas of high-severity fire in which tree mortality is over 90 percent.

The resulting post-fire forest is not the same in terms of forest composition and the range of age classes of trees, making them more vulnerable to severe impacts in the future. Between these effects and the loss of infrastructure and homes, there’s often a fairly negative view of fire within our state. But we need to also focus on the good that fire can do, so that we can get more support for using it as a tool more widely.

The Future of Giant Sequoia Forests

Save the Redwoods League began elevating their scientific research and restoration in the giant sequoia ecosystem following high-severity fires in a handful of groves in 2017 and the acquisition of Alder Creek. Even though most of the giant sequoia range is protected land, we know what we need to do to truly protect giant sequoia: Restore the forests’ fire resilience. But this is not being done at the scale that it needs to be. I’m hoping that California can get there. In the meantime, the League is taking active steps, like conducting studies on giant sequoia mortality and preparing for prescribed burns in groves.

Roughly half of the giant sequoia range has burned in the last five years in severe wildfire. We need to do better for giant sequoia if we don’t want to keep watching them disappear. We need to push for more funding and support to do better across the entire range because this is the only place in the world where giant sequoia grow. Losing even a handful of ancient trees is a huge loss. We need to start thinking on a rangewide scale in order to have the most advantageous effects on our groves so that the ancient monarchs can continue to thrive and survive in the future.

Last year, when Sequoia National Park implemented the prescribed burn in the Giant Forest, visitors were able to drive through during the burn and walk through quickly after the fire. This gave many people a chance to see fire on the ground under monarch giant sequoia and hopefully understand its importance for the ancient trees and the entire ecosystem. I hope this provided a positive experience with fire and allowed people to walk away with a better understanding of the advantageous effects fire can have on an ecosystem. This knowledge will help increase the positive messaging we need about fire in the Sierra, and particularly, in the giant sequoia range. We need to continue to build support for this type of “good” fire so that we can get more of that fire on the ground and limit the spread of future severe fire. 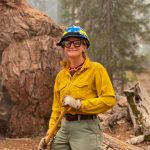 Linnea Hardlund is a former field botanist, a wildland firefighter, and a fire ecologist. She is now the League's giant sequoia forest fellow. She is named after her great grandmother and Swedish botanist Carl Linnaeus.

2 Responses to “Field Notes From a Sequoia Forest Fellow” 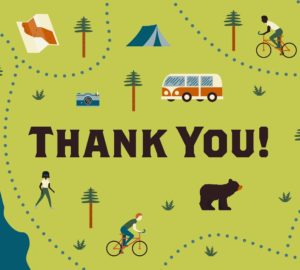 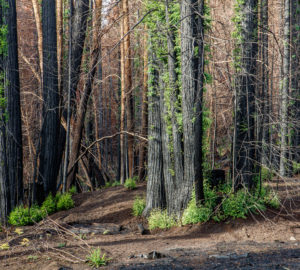 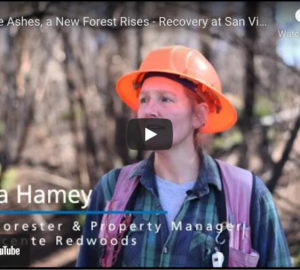 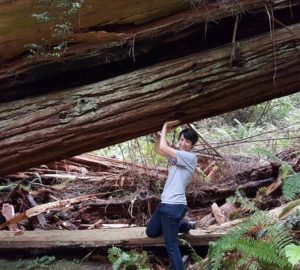 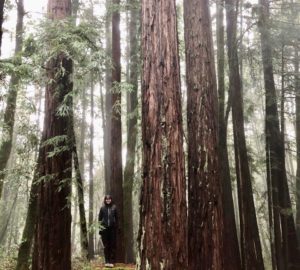