All you readers out there know that a day in the redwoods is good for the soul.  It is calming, inspirational, healing and fun. Whether you walk with your honey, picnic with friends or romp with your children, it is guaranteed to be memorable.

Now we know that these wonderful experiences are also good for the local economy.

Visitors to Redwood National Park spent more than $20 million in nearby communities in 2011.  More than 360,000 people visited the National Park that year.

But those numbers do not include the visitors count to the three state parks (Del Norte Redwoods, Jedediah Smith Redwoods, and Prairie Creek Redwoods) that, combined, make up the Redwood National and State Parks.

Another 500,000 people visited those State Parks in 2011.  That translates to more than $40 million in economic activity for the nearby communities.

Quantifying the economic benefit of conservation is part of the idea of “ecosystem services.”  The underlying concept of that term is that nature provides us value; e.g., healthy land and waterways provide clean water that is good for our heath and also has economic benefit.  The bees that pollinate the trees that produce our favorite fruit are another example of an ecosystem service.  Our old-growth redwood forests provide valuable ecosystem services as well. They are the largest carbon storage systems on the planet and provide some $40 million per year in economic activity to the North Coast of California, among other benefits

Can you identify other examples of ecosystem services involving the redwoods? 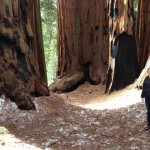 I fastened on my snowshoes and set off for a wintertime hike among the giant sequoias.  I quickly realized the snow in the forest was patchy at best and completely melted at worst, and it’s only March! It was shocking … Continued On a foggy July night in 1850, the Baltimore clipper Frolic sailed south along the Mendocino coast, bound for San Francisco and its booming economy.  The hold of the former opium ship was filled with all the luxuries of the … Continued

2 Responses to “Economic Benefit of Conservation”