Want Redwoods on Your License Plate? With your help, our state tree – none other than California’s redwoods – could be featured on license plates statewide! What’s more, the proceeds from license plate sales and annual renewals will support the conservation and restoration of California’s state parks. However, we need you to help make the redwood license plate a reality.

We have until May 2017 to collect 7,000 more pre-orders before the Department of Motor Vehicles will produce the plates.

Need another reason to buy a state park license plate?

Buy a Plate if you Love State Parks

California State Parks form the largest state park system in the U.S., caring for the biggest and most diverse cultural and natural heritage sites. In the years since the League helped create the State Park system, it has grown to 280 parks, including 49 redwood parks from Big Sur to the Oregon border. These incredible public spaces include parks like Big Basin Redwoods State Park, California’s oldest state park and the largest ancient stand of coast redwoods remaining south of San Francisco. Every license plate that you, your friends, or your family members purchase will help protect and restore stands of primeval redwood forests, fragile desert ecosystems, pristine sandy beaches, and so much more.

Buy a Plate if you Want to Support Local Artists

In 2015, California State Parks held a statewide contest calling for artists to submit designs that featured redwoods and captured the spirit of the trees themselves. Middle school art teacher and Napa Valley resident, Wyn Ericson (external link), was selected as the contest winner. With your help, his artwork and the world-renowned trees could be on your license plate.

Not only are redwoods our state tree, but they’re also the tallest, largest, and among the oldest trees in the world. They catalyzed the conservation movement in the U.S. and they continue to help us fight against threats like climate change, storing more carbon than any other forest globally. Whether you love them for their unique beauty, their resilience across the millennia, or their critical role in the fight against climate change, show everyone your love of redwoods by displaying them proudly on your vehicles. A First Encounter with Redwood Grandeur

Our first redwood outing was to Butano State Park, which is a 4,600-acre park located in Pescadero. We chose this park due to its proximity to Hwy. 1 so that after our hike, we could drive up the coast to Pacifica to have dinner, thereby making a full day of our adventure. 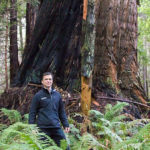 Protecting a Forest, Restoring a Way of Life

The spectacular Sonoma Coast and the mighty redwood forests are iconic elements of California’s identity. And forever intertwined with these inspiring landscapes is the cultural richness of the Native American tribes that have lived for thousands of years along the coastal bluffs and forested waterways. Save the Redwoods League and its partners are celebrating one special place along the coastline where these uniquely Californian assets come together in one successful conservation achievement, the protection of Stewarts Point.