Warning: this topic is gruesome, and awesome.

Last week, Land Project Manager Christine Aralia and I walked the Orick Mill Site with Texas State researcher Butch Weckerly. Butch has studied the Roosevelt elk in Redwood National and State Parks since 1997, witnessing local extinctions and population explosions of the elk over the years.

We walked onto the mill site to figure how we can incorporate adaptation management for elk into the vision for the property, and immediately found a freshly killed elk that had been taken down by a mountain lion. The stomach had been removed by the predator and there were clear signs of how the animal died — both the windpipe was ripped out and the nose was torn, because mountain lions clamp down on the nose of their prey to quickly suffocate it. Click to view image of the kill.

As dusk approached, we kept a watchful eye on the carcass in hopes the mountain lion returned to its kill. It didn’t, but three black bears wandered out of the forest in the last light of the day and gnawed on the elk.

Though some may find it hard to stomach, this is a good sign of natural wildlife activity, with top predators helping to sustain a healthy food web. Usually these interactions go on behind the scenes, but this amazing, up-close-and-personal wildlife day in Orick reminds us how important our work is to further restore this old mill site so it becomes even better habitat for north coast wildlife. 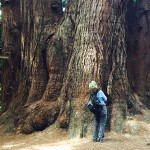 If you’re like so many San Francisco Bay Area residents, nearby Muir Woods National Monument is your go-to place for a redwood-forest experience. But did you know about these 16 redwood parks within a one-hour drive of San Francisco? 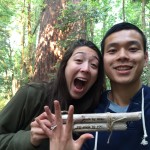 Mae Carter agreed that she and her husband Bob qualify as world travelers, having visited 150 foreign countries. Of all the wonders they’ve seen, the longtime members of Save the Redwoods League count the redwood forest among their favorite places.