Bird’s Nest Fungus in the Forest

This fall and winter has definitely been a dry one for us here in California. One thing I’ve noticed is that with limited rainfall comes fewer mushrooms. I have always associated the rainy fall with prime mushroom time. I love hiking through the forest and discovering the almost-hidden mushrooms peeking out from under the leaf litter on the ground.

One mushroom I recently saw for the first time in the redwoods was a bird’s nest fungus. Not only does this mushroom look really cool, like a bird’s nest with little eggs in it, but it has an interesting story as well.

Bird’s nest fungus, in the family Nidulariaceae, is obviously named for its appearance. This fungus receives its nutrients from decaying wood and plant matter, and therefore is commonly found on fallen logs or branches.

What is most interesting about this fungus is how it reproduces.  The mushroom forms a structure that looks like a small bird’s nest. In the “nest” are tiny flattened spheres which look like eggs. These spheres are small capsules called peridioles which house the spores.

The “bird’s nest” is shaped in a way that it becomes a perfect splash cup. When a raindrop falls and hits the cup of the mushroom, it has enough force to propel the peridioles into the air, up to a meter away! The peridioles can then land on a solid surface, such as a leaf or twig, and stick to it. From there, the spores are released and the whole life cycle starts  over again.

If you have seen one of these mushrooms in the forest or your backyard, please send us a picture through our Facebook page!

Make sure to check out this rockin’ video of spore dispersal with the bird’s nest mushrooms. 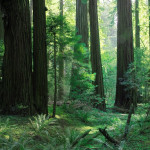 It’s a brand new year, and with it comes the inevitable New Year’s resolutions. Like many people, I plan to eat a healthier diet and exercise more (sure, and let’s see how long I last!). Besides those, here are some … Continued Why are all the tanoaks dying?

During a recent walk through Sam MacDonald Park in San Mateo County, I noticed many downed, brown-leafed tanoak trees amongst the towering redwoods. At first I wondered why the county would cut down so many trees, but then I realized … Continued