I grew up in Northern California and witnessed the inspiring recovery of an endangered species over the past few decades. As a frequent beach goer throughout my life, I remember it was unusual to see brown pelicans diving along the shore when I was child. I was always fascinated by pelicans primarily because I could recognize them with their impressively long beak and because my Mom taught me a rhyme about them when I was little. It went something like, “Pelican, oh Pelican, your beak can hold more than your belly can.”

Brown pelicans were one of the many species whose populations were devastated by DDT spraying. After DDT was banned in the early 1970’s, pelican populations began to recover. Over the past 15 years or so, I slowly realized that pelicans no longer seemed rare. I saw them gliding over the waves in v-formations off the coast of Ventura, CA every time I went to the beach on family holidays and also began seeing them dive into the San Francisco bay along the Richmond San Rafael Bridge on my daily commute in graduate school. Clearly, pelicans were becoming more common and in 2009, the brown pelican was delisted from the Endangered Species List by the U.S. Fish & Wildlife Service.

Today is Endangered Species Day. This is the day for us to focus on the way too many species in peril around our planet.  In the redwood forest, such endangered species include well known animals such as salmon, the northern spotted owl, marbled murrelet,  and California condor. It also includes less well know species like the Mount Hermon June beetle  and Dudley’s lousewort. My brown pelican memories teach me that recovery of species is possible if we pay attention and care enough to make the sometimes difficult changes needed to save the endangered.

Learn about our restoration activities with California State Parks in Del Norte to aid the recovery of endangered salmon, marbled murrelets, and northern spotted owls. 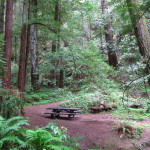 It’s Picnic Season! Ready for a Delicious Day in the Redwoods?

There are a lot of health benefits to a day in the redwoods – exercise and stress reduction are just a couple. Nice weather is good motivation to get active in nature and kick-start the healthy habits that went into … Continued . . . so reported Major General Anthony L. Jackson, Director of the Department of Parks and Recreation (DPR), to the State Parks Commission last Friday morning.  That is a lot of volunteers! If those 30,000 volunteers were to lie … Continued