The Best Thing I Ever Ate … near the Redwoods!

I don’t know about you, but I love to eat. I can’t get enough of good food, especially after exercising in the redwoods. I’m obsessed with calorie-counting because my friends and I are planning a birthday bash in October, so every meal, snack and workout counts!

The weather over the weekend was beautiful. It was warm enough for shorts and cool enough to run beneath the redwoods. I headed out for Portola Redwoods State Park at 7 a.m. I love Portola Redwoods because of its 18 miles of hiking trails, camping sites and two beautiful creeks. It also is home to some of the tallest, most majestic redwoods in the Santa Cruz Mountains.

When I’m there I usually jog. Sometimes, when I’m up for it, and no one is watching, and there is a big, delicious meal waiting for me, I will incorporate some moves from PiYo or Turbo Kickboxing. Jogging usually depends on how late I was up the night before, but that all changes when I’m at Portola Redwoods. The park is always energizing – the sun is usually shining while it stays cool and damp near the forest floor. This makes for ideal running conditions. Running on these trails always beats jogging on pavement because it’s far more forgiving on these old knees.

Three hours later I completed my workout and I decided to top off my day with a meal at Alice’s Restaurant. It’s the best place to get a grilled fish sandwich with fries. Most restaurants will serve fried fish, so I tend to avoid it if I plan to order a side of fries. I have to be picky because I have that birthday bash coming up in October, remember? There is one other thing that I like almost as much as fries: potato chips.  And guess what? My sandwich came with a bag of chips too!  What more can a girl can ask for here at Alice’s? Now how about a slice of pie to end the meal and the gorgeous day!

Do you have a favorite restaurant in or near the redwoods? Let me know I’d love to check it out! I’ve enjoyed watching the Olympics these past three weeks—and not just because it’s hosted in London with a British squad that has surpassed all expectations.  It’s just plain fun to get into obscure sports and watch people at the top … Continued 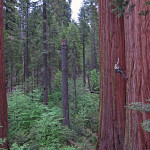 Barking up the Right Tree

It’s summertime and redwood researchers are putting on their climbing gear and ascending  into the leafy crowns of giant sequoias. A slow climb is worth the effort to see how the giants are growing. But why climb hundreds of feet … Continued

2 Responses to “The Best Thing I Ever Ate … near the Redwoods!”