Potential for future public access along the famed Lost Coast

San Francisco, Calif. (December 9, 2021) — Save the Redwoods League today announced it has secured a rare opportunity to purchase and permanently protect the 3,181-acre Lost Coast Redwoods property, which spans five miles of rugged, undeveloped Northern California coastline in Mendocino County. The League has negotiated an agreement to buy the ecologically and culturally significant coastal landscape from timberland owner Soper Company. The nonprofit must raise $36.9 million by December 31 to fund the purchase and secure a total of $43.4 million to support the stewardship of the property as part of the protected mosaic of California’s famed Lost Coast. Every donation made before the December 31 deadline, up to a total of $1 million, will be matched dollar-for-dollar.

“The Lost Coast Redwoods property is the largest privately owned California coastline in the coast redwood range and the League’s highest priority land acquisition,” said Sam Hodder, president and CEO of Save the Redwoods League. “The property’s expansive redwood forest, spanning 5 miles of spectacular California coastline, was under direct threat of accelerated harvesting or development. We must act quickly to ensure these mature second-growth redwoods continue on a path to becoming an old-growth redwood forest for future generations.”

Soper Company originally purchased the Lost Coast Redwoods property, known to the timberland owner as DeVilbiss Ranch, for its unique coastal presence. The company has utilized the property for timber production since 1963.

Most of the property had been aggressively logged in prior decades, and the Soper Company focused its work subsequently on developing a sustainably managed redwood forest. It was the first California timber company to practice sustainable forestry through ethical stewardship, and it led the timber industry in science-based innovation and land management practices that foster sustainable forests and healthy salmon habitat. Soper Company was also the first California-based timber company to plant one million trees.

“This sale represents a unique opportunity to purchase more than 5 miles of California coastline inclusive of beaches, trails, open space, streams and a high concentration of quality timber,” said Aric Starck, executive chairman of Soper Company. “We are pleased to partner on this acquisition with Save the Redwoods League.”

Much of the property’s 2,250-acre forest is now home to second-growth coast redwoods, Douglas-fir and grand fir, ranging in age from 80 to 100 years, with large, old-growth trees scattered throughout. The forested hillsides overlook coastal prairies and steep bluffs that lead down to a vast secluded beach and seascape.

Zoned for timber and agricultural management, the Lost Coast Redwoods property contains large trees that amount to millions of board feet of high-quality timber. Given its proximity to Highway 1 and well-maintained interior roads, the land faced an immediate threat of aggressive logging if acquired by another buyer that does not share the Soper Company‘s value of sustainable management.

“We are thrilled to work with Soper Company and appreciate having the opportunity to acquire this special place,” Hodder said. “This acquisition is a rare moment, indeed: We have the chance to save a quintessential piece of the California coast for future generations. Had this deal gone another way, this property would be under direct and immediate threat of accelerated redwood harvesting. This forested landscape needs to continue to heal and be protected forever.”

The property supports abundant habitat for coho salmon and steelhead trout, culturally and ecologically important species that are protected under the Endangered Species Act. Cottaneva and Dunn Creeks traverse the property, and both have been identified by the California Department of Fish and Wildlife as critical habitat for spawning and rearing juvenile fish. These streams, which Soper helped to restore, also provide habitat for other plant and animal species of special concern, such as seaside bittercress, Whitney’s farewell to spring, Point Reyes horkelia, foothill yellow-legged frog, Pacific tailed frog, red-bellied newt and southern torrent salamander.

The forest on the Lost Coast Redwoods property provides suitable habitat for northern spotted owl, marbled murrelet and Pacific fisher — all of which are listed under the Endangered Species Act. This property is also home to Roosevelt elk, black-tailed deer and mountain lions.

Lost Coast Redwoods is adjacent to the League’s Shady Dell property and within a quarter-mile of its Cape Vizcaino property. This connectivity offers the potential for the League and its partners to extend the famed Lost Coast Trail southward 5 miles from Shady Dell.

If the League is successful in raising the funds to purchase the Lost Coast Redwoods property, it will survey the landscape and begin to consider options and potential routes for a new trail and future public access. This work would advance the League’s mission to provide all people with opportunities to experience the peace and beauty of the redwoods.

Lost Coast Redwoods is in a place where the traditional territories of the Sinkyone, Cahto and Coast Yuki peoples converge. For millennia, these tribal nations have maintained relationships of reciprocity with the landscapes and seascapes of their traditional territories, thus enabling biological diversity and abundance. In the mid-1800s, they were subjected to genocide and forced removal by European American settlers. Tribal nations of this region remain connected to their territories and are revitalizing their roles of traditional guardianship and stewardship.

For more than 100 years, the Lost Coast Redwoods property has been managed for commercial timber, and it is currently zoned for timber and agricultural management. The DeVilbiss family established a ranch here in the late 19th century, and Soper Company has managed the property for timber production since 1963.

Save the Redwoods League has secured an agreement to purchase the Lost Coast Redwoods property for $36.9 million and is seeking to raise a total of $43.4 million in support of the acquisition and stewardship of the property. The League is pursuing contributions and financing toward the purchase by December 31, 2021, and will continue fundraising to support the remaining acquisition and stewardship costs in 2022.

The League has already secured more than $10 million in private donations for this project. The public can learn more about Lost Coast Redwoods and donate to support its protection and stewardship on the Save the Redwoods League website. Every donation, up to a total of $1 million, will be matched dollar-for-dollar by Ralph Eschenbach and Carol Joy Provan, honorary chairs for the Forever Forest Campaign through the end of the year.

Lost Coast Redwoods is an initiative of Forever Forest: The Campaign for the Redwoods, a comprehensive campaign launched by Save the Redwoods League in January 2020 to garner support for the organization’s ambitious vision for the next century of redwoods conservation. The League’s goal is to raise $120 million by the March of 2022 to fund the first years of this centennial vision, which includes protecting entire landscapes through large-scale, strategic land acquisitions; restoring young redwood forests to become the old-growth forests of the future; and connecting all people with the beauty and power of the redwoods through transformational park experiences.

— To schedule an interview, contact Robin Carr at (415) 971-3991 or redwoods@landispr.com.
For high resolution maps, images or video, please visit the League’s newsroom. — 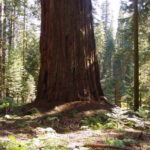 The coast redwood is the world’s tallest tree, and its genome is among the most complex sequenced. Nearly nine times larger than the human genome, it is also the second largest genome sequenced.