From the soaring redwood forests of the North Coast to the magical groves of giant sequoia in the Sierra Nevada, the state trees of California rank among the planet’s most spectacular natural wonders. But the existence of these magnificent conifers shouldn’t be taken for granted. Their protection was never guaranteed, and is the result of the unflagging efforts by the generations of conservationists determined to protect them.

Save the Redwoods League has led this effort, protecting more than 200,000 acres of redwood and giant sequoia forests and helping to create and expand 66 redwood parks and reserves over the past century. Throughout all these efforts, a longstanding and dedicated partner has been California State Parks, the largest state lands management agency in the nation and a dedicated advocate of resource conservation and public access. As the Governor notes, coast redwoods and giant sequoia are both foundational elements of California’s natural heritage and global treasure. Our redwood and giant sequoia parks are prime destinations for both resident and international visitors. They are cornerstones for unique ecosystems that support a wide suite of imperiled species. Ancient redwood forests help sustain us, storing more carbon than any other forest in the world.

Their ongoing protection and the restoration of forests that have been degraded due to clearcut logging or other destructive activities stands at the core of the League’s mission. It is a charge placed on us by posterity, by our grandchildren and great-grandchildren, and it’s a challenge we’re determined to meet.

Save the Redwoods League and our Centennial partners are hosting a series of specials activities throughout the month of October in observation of the League’s Centennial Year and the Governor’s proclamation. Included are family-friendly festivals in Humboldt County and San Francisco, a marathon along the Avenue of the Giants in Humboldt Redwoods State Park, free passes to California redwood parks, the launch of a new K-12 digital field trip featuring the giant sequoia of Calaveras Big Trees State Park, a premiere of a film about the last remaining old-growth coast redwood in the Oakland Hills, a night of stargazing amid the giant sequoia at Calaveras Big Trees State Park, and a fundraising gala in San Francisco. We invite any and all to attend these events and help us celebrate.

The long association between Save the Redwoods League and California State Parks is a long-standing, exemplary public-private partnership, resulting in the protection of vast acreages of redwoods and giant sequoia now accessible to the public. But we must look to the challenges facing these iconic trees in the near future: climate change, development, and catastrophic wildfire among them. To address these threats, we need broad public support. As we celebrate the League’s Centennial Year and our partnerships to save these remarkable forests, please help us ensure that our next century will be as productive as the first. Learn more about our vision for next century and how you can take a stand for the redwoods. 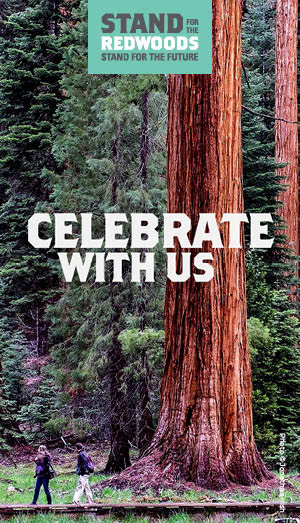 Why has Governor Brown designated October as California Redwoods Month?
Coast redwoods and giant sequoia are California’s state trees and are thus living icons of the Golden State. They are also icons of the broader conservation movement. The California State Senate declared 2018 the Year of the Redwoods with the passage of SR 100, and Save the Redwoods League was honored by the California State Assembly with a Member Resolution sponsored by Assemblymember Mark Stone. The Governor has issued his proclamation in recognition of their status and in honor of the Centennial Year of Save the Redwoods League, the League’s long-standing partnership with California State Parks, and the 50th Anniversary Year of Redwoods National Park.

Will there be any special activities during October?
The League and our partners are hosting a week of special events to commemorate the League’s Centennial Year and 100 years of protecting our redwood forests, including family-friendly festivals in San Francisco and Humboldt County, a marathon (external link) through the Avenue of the Giants in Humboldt Redwoods State Park, the launch of a new K-12 digital field trip featuring the giant sequoia of Calaveras Big Trees State Park, a premiere of a film about the last remaining old-growth coast redwood in the Oakland hills, a free stargazing night (external link) at Calaveras Big Trees State Park, and a fundraising gala in San Francisco. Additionally,the League and 25 park agencies will offer free day-use admission to more than 100 redwood parks on Saturday, October 13, which coincides with Celebration Week.

Given that most ancient redwoods and giant sequoia are protected, has the League’s mission changed? What more needs to be done?
The League’s core mission remains unchanged: protecting, connecting, and restoring redwood and giant sequoia forests. In our second century, we will continue safeguarding the remaining ancient groves, and we will heal the young, recovering redwood forests that surround and sustain them. Forests that have suffered from clearcut logging and from other destructive practices can and will be restored through science-based management.

In regard to climate change, how serious of a threat is it?
Climate change is a challenge everyone around the world will have to face in the next century. Prolonged droughts, higher temperatures, and increased wildfire risk and severity are all potential threats to the health and resilience of our natural ecosystems. In coming decades, the League will continue investing significant resources in research and on-the-ground management to address the impacts of climate change.

In the redwoods, there is a story of hope. Our ancient coast redwood and giant sequoia forests store more carbon per acre than any other forests in the world. By restoring the young, historically logged redwood forests right here in California, we can capture more climate altering carbon from the atmosphere and protect the fragmented old-growth redwoods that are already working hard in the fight against climate change.