Do salamanders bark in the woods?

Every time I talk to a researcher who works in the redwood region, I learn something that makes my jaw drop. It happened again just a few days ago when I was speaking with Prof. David Wake of U.C. Berkeley. We were talking about the animals that live under the redwoods, and he told me there is a salamander in the redwood forest that BARKS!

The California Giant Salamander (Dicamptodon ensatus) is one of only two salamanders in the world that vocalizes. This large spotted amphibian makes its home in the coast redwood forests of primarily Mendocino, Napa, Sonoma, and Santa Cruz Counties. It is a predator that deserves respect under the giant trees: it eats insects, other salamanders, and even mice.

Check out this short video of the amazing giant salamander barking out its views on the world:

Prof. Wake has been able to find giant salamanders when walking through the redwood forest by simply listening for its call. So cool!

Want to learn more about the plants and animals of the redwood forest? Check out our Fun Forest Facts! Your Employer Can Double Your Impact to Protect the Forest

I’m so pleased to report that resounding responses from our loyal and generous supporters raised the $100,000 needed to secure a matching gift for CEMEX Redwoods by December 31, 2012! Long-time League members Pete and Patty Mattson issued the challenge … Continued 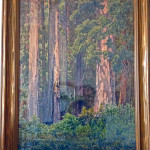 On my visit to Washington, D.C. last week, I had the pleasure of visiting with John Merriam, grandson of League founder John C. Merriam.  John shared stories of his years in government service—from the Foreign Service to Capitol Hill. He … Continued