My First Encounter with the Giants

The fresh, salty air hung heavy as I wound my way south along the coastal highway with expansive vistas of the Pacific Ocean stretching across and meeting the blue sky infinitely far away. I’m on my way to see the giants I’d dreamed about since I was a kid. Could it be true? Entire cars driving through a tunnel in a tree trunk? No way.

My first stop was Jedediah Smith Redwoods State Park, nestled in the northern most corner of California. I arrived in my blue Subaru covered in a thick layer of dust and dirt, after having traveled over 5,000 miles across the country visiting National Parks and city after city. During my journey, I’ve encountered raging waterfalls, pothole-strewn dirt roads, forests, deserts, spectacular landscapes and incredible people from every walk of life; though, nothing could have prepared me for what I was to experience in the redwood forests. Trees towered above like natural skyscrapers, their trunks wider than the car itself stood alongside the asphalt, guiding me towards what seemed to be a secret sanctuary deep in the heart of the California forest. I craned my neck outside the driver’s side window to catch my first glimpse of their colossal scale, reaching endlessly into the sky above a canopy of leaves that shielded their majestic crown from the ground.

The trees safely guided me to their shrine within Jedediah State Park, and as I parked the car, I couldn’t muster up the courage to leave it and confront the experience I never could’ve imagined. Perhaps I was afraid that my mind wouldn’t be able to piece together what I would soon see, and I was right. My brain struggled to cope with this new experience. I have traveled far and wide in the past few weeks, encountering completely foreign landscapes, plants and animals. However, it in no way prepared me for what I would encounter with the redwoods. I couldn’t seem to grasp the idea that these massive creatures were living, and have been thriving for thousands of years, growing to the rival the height of 30-story skyscrapers. Along the way, they play an essential part of the ecosystem, nurturing and caring for countless plants and animals in the vicinity, many of which have still been undiscovered. A whole ecosystem thrives amidst their canopy, hundreds of feet above the forest floor. In a sense, these giants seem to represent mother nature herself. For thousands of years, they watch over the forest like a protective mother, witnessing the cycle of life as the giants fall to the floor from lightning strikes, floods or fires. They’ve grown adept at surviving in a specific niche. Their thick bark is fire resistant, and their wood repels insects, which otherwise cause major problems in forests across the country. They’re beautifully adapted to survive almost anything mother nature can throw their way, except for mankind.

Since the 19th century, these magnificent creatures, despite their grace and elegance, have been logged for their hearty, rot and pest-resistant timber. The population of old-growth forests has been drastically slashed by loggers. Ecosystems have collapsed due to their disappearance. However, due to the quick action of the Save the Redwoods League and other conservationists, we’ve held onto the last straw of their indigenous habitat and have restored many forests. It is our duty as humans to undo the destruction we’ve caused to preserve the beauty of these forests for future generations to behold, and to respect the ecosystems that these creatures create and nurture.

Walking amongst the giants, I strained my neck for hours on hikes through the forest, taking in all I could in the short amount of time I had. With two months to spare, I must move quickly across the country from Pittsburgh to the Pacific Northwest to the South-West to the Mid-West and back to Pittsburgh again. I had a lot of ground to cover, tons of places to see and scores of people to meet. I pressed onward South from the Redwood National Park towards Humboldt Redwoods State Park to find a place to camp. With great luck, I found a campsite nestled in amongst the trees, shading me from the harsh sun and the violent winds. They protected me and nursed me as one of their own. I could feel an almost mystical aura of vibrant, positive energy stemming from the trees as they stood silently in my presence. I woke to find them still standing proud, as they had been doing for hundreds of years, keeping a watchful eye over the campground while birds zipped around overhead shouting at each other. What better way to start the day than a peaceful walk through the forest?

It took a great deal of time for my brain to come to peace with itself, as it struggled to confront the grandeur of the creatures surrounding me. Yes, they were real. Yes, they were alive and growing, slowly but surely. You could see the scars from fires that scarred their trunks black, even hollowed some trees out, yet they stood standing with beautiful green leaves shooting out from all sides. It seemed as though, despite the abundant evidence of destruction, everything was exactly where it should be, perfectly placed by mother nature in a carefully arranged system. I strolled among the giants in awe. I covered a shockingly short distance, stunted by my lack of movement as I was caught in a senseless daze looking above at the canopy in which I couldn’t even make out the end of the trees. They could have stretched on endlessly into space for all I knew. In due time, I came to fully appreciate the scope of the natural world surrounding me, the divine nature of the redwoods and the reverence they command from all who visit. My neck is strained from spending so much time looking straight up, but for good reason. I would sacrifice most anything to be in the company of such peaceful, divine creatures once again. There is something special about the redwoods, something I can attest to, but something that words can do no justice to. Not even the finest poets or writers could ever formulate such a perfect structure of words to accurately depict the enchantment of these gentle giants; so, I will not attempt to describe it or demystify it. You will only have to experience it for yourself.

Plan your trip to the redwoods forest today! 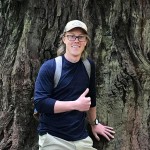