Today marks the 153rd birthday of the spectacular giant sequoia grove in Yosemite National Park, Mariposa Grove. The protection of Mariposa helped inspire a movement of conservation at a time when sequoia were being cut, leading to the protection of the biggest trees in the world.

On June 30, 1864, in a first of its kind piece of legislation, Abraham Lincoln, deeded the Mariposa Grove to the State of California for protection. The bill stated that the land was designated “…for public use, resort, and recreation and shall be inalienable for all time.” This monumental document helped launch further protection of giant sequoia groves with the establishment of General Grant (now part of Kings Canyon), Sequoia, and Yosemite National Parks in 1890.

Now, 96% of the giant sequoia groves are protected for all to enjoy but making sure these trees are not able to be cut down, does not fully shield the trees from possible damage. With 500 mature giant sequoia in the grove, this forest has been highly “loved” over the past century and a half. Roads and trails have affected the trees’ roots and altered the hydrology and waterways in the area.

In an effort to maintain and nurture the grove, the League supported Yosemite National Park’s restoration efforts. For the past two years, the park has been working to improve the health and function of the trees and surrounding ecosystem, while enhancing visitor experience. Roads have been removed and trails elevated. In addition, our Redwoods and Climate Change Initiative (RCCI) team is studying how the grove’s large and small giant sequoia trees have been growing over time. They used the RCCI methods of assessing tree size and shape, then used tree cores collected at multiple heights to determine how much the trees have grown. These data help us understand how climate change is affecting them now and how it will in the future. The research also serves as a baseline for studying how the trees respond to restoration work in the grove.

Mariposa Grove is scheduled to reopen this fall. If you plan a visit to the newly restored grove sometime in the next year, remember that protection of these giants is always an ongoing process.

When you visit the park, if you have any young ones traveling with you, make sure to bring our new Giant Sequoia Education brochure. Speak up to Protect our National Monuments

We have until July 10 to tell the Trump administration just how much our public lands mean to us. The public comment period will be over soon for the 27 national monuments under review as directed by a recent executive order. 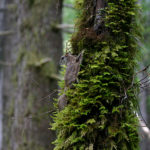 It’s estimated that about 150 species go extinct per day, so it is always exciting news when a new species is discovered! This spring, we learned about a new mammal found in the coastal redwood range called Humboldt’s flying squirrel.