Redwoods in a Starring Role

Autumn is definitely upon us, and as the colder months advance, many of us transition into “hibernation mode,” enjoying some cozy indoors activities in favor of outdoor adventures. If you find yourself more in the mood for a movie and hot cocoa than a trek in the woods, you can still enjoy some stunning redwoods scenery. Did you know that several redwood parks have provided the setting for some of our favorite films? Maybe you can recognize the forests of Muir Woods National Monument, Prairie Creek Redwoods State Park, and Jedediah Smith State Park—among others—in films like The Lost World: Jurassic Park, Outbreak, and Rise of the Planet of the Apes. George Lucas also favored the redwood giants as the setting for scenes in Star Wars Episode VI: Return of the Jedi.

There are some pretty amazing shots of the redwoods in these movies. Think you can guess where they were filmed? Test your expertise with the quiz below! I’m looking forward to settling in with a bowl of popcorn on a chilly night to watch dinosaurs and ewoks among some my favorite places in the redwoods.

Match the movie and scene with the redwoods park it was filmed in. Leave a comment and let us know how you did, and which is your favorite redwoods scene! 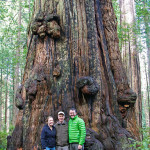 Ruskin Hartley’s most recent and final blog for Save the Redwoods League was titled “Bracing for Rain” and anticipated the Bay Area’s first wet weather of the season.  Ruskin’s resignation from his position as the League’s Executive Director led me … Continued Slug Truth is Stranger than Fiction

Did you know that the coast redwood forest is home to the largest slug in North America and the second largest slug worldwide*?  Yep, our very own banana slug (Ariolimax columbianus) grows up to 8 inches in length and can … Continued

2 Responses to “Redwoods in a Starring Role”