A Healing Giant among Redwoods

Meet a fascinating plant of redwood country: elk clover, also known as California spikenard (Aralia californica), is the only member of the ginseng family that is native to California.  It’s a perennial deciduous plant (meaning it sheds its leaves in the fall),  and it has really large leaves about the size of a person’s hand.

Although it can grow up to about 9 feet tall, its stem never becomes woody like a tree or shrub. It’s the largest plant of its kind in the redwood forest. You can find it in moist, shady canyons and areas close to water sources. Elk clovers grow in abundance near one of our fern study sites in Samuel P. Taylor State Park, under the shade of the redwoods.

Its flowers and berries grow in a shape known as an “umbel,” with each flower growing on its own evenly spaced stalk around a central point, like the ribs of an umbrella around its handle.

The Pomo Indians have used this plant to make a healing drink, and throughout history this plant and others in its genus have been known for their medicinal qualities.

Next time you’re out in the redwood forest, see if you can spot elk clover!

Learn more about elk clover from the USDA and Calflora. 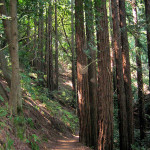 Learning from Our Predecessors’ Vision

Last week I hiked the French Trail in Redwood Regional Park to take in the quiet of early morning in our neighboring redwood forest. Every time, I appreciate the wisdom, foresight and tenacity of those who preserved these redwoods and … Continued I’ve enjoyed watching the Olympics these past three weeks—and not just because it’s hosted in London with a British squad that has surpassed all expectations.  It’s just plain fun to get into obscure sports and watch people at the top … Continued

One Response to “A Healing Giant among Redwoods”