Life on the Forest’s Edge

It takes a long time to get to Hendy Woods State Park from San Francisco. It takes a while to get there from pretty much anywhere, but it’s worth it.  Approaching the park through the Anderson Valley wine country, the ancient trees rise up out of the surrounding landscape of fields and orchards, great monuments to our smallness and folly.  The park’s two old growth groves stand immediately next to open fields, a contrast that only makes the giants seem even more grand.  The trees throw long shadows far into the rows and meadows and in return, light from the outside world glances beneath the crowns and brightens the dark forest floor.  A vigorous and growing patch of invasive Vinca minor radiates out from one of the trails into the grove, spreading both along its border and into the forest itself.

The great trees at Hendy Woods may be protected from logging and development, but the future of the forest is not so certain.  Like many of our remaining patches of ancient forest, these two groves are small and surrounded in part by open land.  The line between forest and field may seem a stark one to the human eye, but nature’s boundaries are rarely so abrupt. The areas between forest and field (or between any two different types of vegetation) are known as edges, and often have a character that is quite different than a deep woodland interior.  Many wildlife species flourish in this dusky half-world of moderated light and temperature, and the proximity of different habitat types can be vital for small, less-mobile animals that require a number of different structures for foraging, breeding, and cover.  However, a number of the redwoods’ most recognizable species—among them marbled murrelet, varied thrush, and red-backed vole—make their homes deep in the forest, and when the places they need are small and surrounded by other land uses, the light and noise that penetrate deep into the forest can make habitat less suitable for breeding or rearing young, and predators (who are often associated with patchy, human-dominated landscapes) such as raccoons, skunks, and jays can more easily hunt animals for whom the depth of the forest once offered protection.  For species that depend on the sorts of structure particular to old forests, these few remaining patches are basically islands in an unnavigable sea (but that’s a story for another time).

It isn’t just wildlife that suffers from life on the edge.  Small patches of forest with exposed edges are more vulnerable to disturbance like windstorms or fire, and invasive species can overcome an area more easily when much of it is near its edge.  Research sponsored by the League has shown that these edge effects can extend as much as 200 meters into an old growth grove (Russell 2001).  This means that any grove smaller than 30 acres is essentially all edge, with none of the interior habitat needed by some of the forests’ most recognizable species.  Perhaps most troubling for the future of the forest is the changing in tree regeneration found on the edges of the forest, where the light environment and seed sources are much different from the interior.  In such small patches of forest, will the trees of the future be the same as those of today?

Changing patterns of regeneration, encroachment by invasive species, altered light and noise environments—none of these problems are so visible as a clearcut or housing development, yet chronic issues like these must be solved if we are to truly protect the forest and all its parts in the long term.  Forests are more than just trees, and saving the redwoods means more than simply preserving areas where big trees stand.  The League is working to save ancient forests not only by protecting the groves themselves but also the lands around them, so that we might protect not only today’s ancient forests, but those of the future as well.

Want to learn more? See the redwoods research the League has sponsored. Why are Christmas trees shaped the way they are, pointy on top and wide at the bottom?  It’s because their growth is regulated by hormones.  One such hormone (called auxin) is produced at the growing tip of the treetop and … Continued 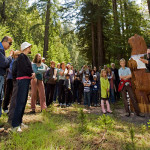 by Jennifer Benito-Kowalski on December 31, 2012

What an incredible year for the redwoods! This year approximately 2,000 acres of redwood forestland totaling $14 million were protected. More than $200,000 in education and research grants were awarded to educators working to inspire a new generation of redwood … Continued