This week is the 50-year anniversary of the historic 1964 Christmas flood. Half a century ago, several weeks of monumental rains devastated communities on the north coast and brought a tremendous amount of sediment into the streams and redwood forests of Humboldt Redwoods State Park.

For years as I’ve driven along Highway 101 in Humboldt Redwoods State Park, I’ve marveled at the high water marks above the road. These orange and green signs mark the peak water line from the 1964 flood and stand as a mind-boggling reminder of how much water heavy rains can bring.

Some of these signs seem ridiculously far from the closest river bank, so this week I decided to explore just how high the South Fork Eel River must have been on December 21, 1964 in order to spill into Founder’s Grove. Even after walking through the path of the floodwater, I still can barely imagine how much water it took to submerge the forest!

If you are in Arcata, CA this weekend, check out the ’64 Flood 50th Anniversary Gathering at the Arcata Theater Lounge and definitely plan your next trip to Humboldt Redwoods to check out the high water marks for yourself! If you have spent any time in the amazing natural areas of California, you won’t go very far without experiencing the presence of John Muir — a man who did more for the conservation of our beautiful wild places during … Continued 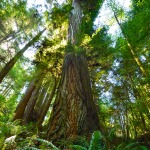 Thanks to your support, we were recently able to purchase and permanently protect Big River-Mendocino Old-Growth Redwoods! Having been in the business of protecting redwoods for nearly a century, you’d think the League would have been involved in every kind of … Continued