The Lost Coast lends itself to adventure like nowhere else in California. As you explore this stunningly beautiful, remote expanse of coastal bluffs and forests, a true sense of discovery takes hold – it feels wonderfully wild and unchanged.

With 100 miles of almost completely roadless beauty, this is the longest stretch of undeveloped coastline left in California. The rugged landscape rewards hikers with breathtaking views and wild, ever-changing terrain. Small wonder that the spectacular trail that winds along the Lost Coast is a top-tier, bucket-list adventure for all who love to get into the wild. And now that trail is even better!

Save the Redwoods League and our partners recently opened the Peter Douglas Coastal Trail, a 2.3-mile extension of the southern end of the Lost Coast Trail, on the Shady Dell property. This land was privately owned until the League purchased the property in 2011 as part of a collaboration with RFFI to protect and restore thousands of acres of redwood forest. Now, for the first time in over a century, the natural wonders of Shady Dell are publicly accessible.

The Peter Douglas Trail will take you through the grove of amazing candelabra redwoods, ancient trees whose massive limbs, warped by wind and weather, drape and swerve like the arms of a candelabra. The trail traverses wildflower-strewn meadows, redwood and Douglas fir forest, and grassy bluffs where you can take in sweeping ocean views and watch for passing whales. This is a magical and rewarding place to explore the some of the last remnants of the wild and natural California coast.

It is a fitting memorial to Peter Douglas, the former executive director of the California Coastal Commission and coauthor of the landmark 1976 Coastal Act. Douglas is famous for his tireless and impassioned advocacy for coastal protection, and for reminding us that “the coast is never saved, it is always being saved.”

Visitors to his namesake trail will easily understand why places like this are worth fighting for. We in California are fortunate to have an inspiringly beautiful and biologically rich coastal area to enjoy, and it’s our honor to carry on Peter’s legacy of strong stewardship.

Our partner Mendocino Land Trust did a phenomenal job of designing the trail and overseeing its construction. The trail was built by crews from the California Conservation Corps, Americorps, and Coastwalk, and talented local contractors. The project was made possible with the support of the California Coastal Commission and State Coastal Conservancy, and members of Save the Redwoods League. This trail is truly a testament to the power of partnership and hard work.

And most of all – it is an awesome place to spend a few hours hiking and checking out the native wildlife and beautiful views. I recommend visiting on National Trails Day®, this Saturday, June 4! Here’s more information about the trail and how to get there. If you visit, let me know what your experience is like.

Connect with me on Twitter @SamH4Redwoods and follow me for tweets about trees, trails and other truths. 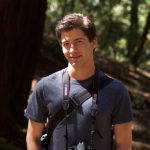 In the tangle of our wireless world we are more connected than ever before. It’s puzzling, then, how distant we now find ourselves from the natural environment. While our world migrates into the cloud, the Redwoods Reporter series will keep a pair of boots on the trail with educators, adventurers, foresters, chefs, doctors, artists and scientists who are called back by the redwood forests. Hikers along the California Coastal Trail in Del Norte County have begun to mistake Morgan Visalli and Jocelyn Enevoldsen for twins. If you ignore Visalli’s blonde hair and Enevoldsen’s dark brunette braids and pay attention to the color spectrum that radiates around them, you can see it too. They wear matching turquoise rain coats, handkerchiefs, and socks.