Bay Area residents got a sneak peek into the hopes and dreams of the Department of the Interior last week when Secretary Sally Jewell came to Crissy Field (external link) to announce the department’s new campaign to connect the next generation of Americans with nature.

We at Save the Redwoods League were thrilled to hear Secretary Jewell’s commitment to repairing “the disconnect between young people and the great outdoors.”  As more and more Americans live in cities and the younger generation is increasingly tied to structured activities and electronic entertainment, our parks and green spaces have never been more critical to our well-being.

Some historical context: California’s coast redwoods and our national and state parks go way back.  Stephen  Mather was a key player in the League’s formation and was the first head of the National Park Service. The League’s founders were instrumental in the creation of the California State Parks committee and in the growth of some 40 redwood state parks.  And in many ways, the magnificent redwoods helped to define the land ethic of the last century – the appreciation of nature for reasons beyond the usefulness and monetary value of its individual components. That paradigm shift in turn spurred the conservation movement.  It is because of that natural progression from a love of redwoods to a deeper commitment to land conservation that the League invests in our education program.

So it was no surprise that while Secretary Jewell was announcing the Obama administration’s plan to help connect the next generation with the outdoors through programs in national parks, the League’s Education & Interpretation Manager, Deborah Zierten, was already putting that plan into action in one of the Bay Area’s remarkable outdoor classrooms, Redwood Regional Park.

With about 35 ninth-grade students from Skyline High in Oakland, Deborah was sharing our science team’s research and techniques studying the impacts of climate change on our redwood forest.  The students measured and observed sword ferns and duff, and practiced the data recording central to the scientific method. They got to learn firsthand how the redwoods are saving us (from carbon sequestration to water filtration), and all the ways we are working to save them.

We at the League eagerly support the National Park Service’s investment in outdoor education and recreation to inspire the next generation to love and care for the outdoors.  You can show your support and help us build the bridge between our young people and our outstanding natural resources by supporting our education programs, learning and sharing more about our redwood research, or even better, taking a kid you love for a walk in the redwoods. 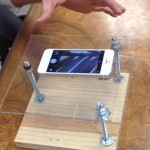 If there is one piece of equipment to make you feel like a scientist, it has to be a microscope. There is something exciting about being able to see the hidden secrets of an object, the minutiae that are not … Continued I think I first really learned the meaning of the word “epiphyte” while working in the rainforest of Ecuador. There are epiphytes all over the trees in the tropical rainforest – one of the most famous  is the orchid. But … Continued