Super Bowl and Redwoods – What Could They Possibly Have in Common?

Well, almost nothing… Really, the only thing they share in common is bringing people together outdoors. Although it’s a far cry from a park or beach, at the very least, the Super Bowl will be played outside among a sea of football fanatics. Everyone will be enjoying a beer, garlic fries and hopefully a sunny, beautiful day in Santa Clara. I know, I just can’t help myself. I’m a glass-half-full type of gal.

If you’re in the Bay Area but you didn’t score tickets to the big game or the surrounding festivities in San Francisco, or would simply prefer to avoid the crowds altogether, here are a few suggestions for including the redwoods in Super Bowl weekend:

Pyramid Redwood Park: “Tucked next to San Francisco’s tallest building in the Financial District is an oasis of redwoods, evergreens, ferns, flowers and fountains. As one of the most popular privately owned public open spaces…in the city, Pyramid Redwood Park provides a lunchtime sanctuary for white-collar workers.” Featured in the New York Times and 7×7 Magazine (scroll down to number 6).

Jedediah Smith Redwoods State Park: Think this wild, scenic old-growth forest is just too far? Think again! We can transport you between touchdowns for a quick redwoods fix. Check out our live feed.

You pick the park and plan your escape: Visit our website during time-outs to get inspired and plan your next visit to the redwoods. If your favorite team doesn’t win, at least you’ll always have the redwoods! by Save the Redwoods League on February 3, 2016

As both a California Assemblyman and now U.S. Representative, Jared Huffman (D-San Rafael) earned a reputation as a stalwart champion of the environment, including the redwood forest. 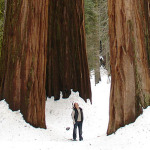 Join Me for a Snowy Sequoia Adventure

We here in California are all pretty relieved by the rain and snow we have received this winter. Our plants are starting to bounce back, we can go skiing again, and our shoes are actually getting muddy when we hike … Continued