Spring has sprung here in the Bay Area, giving me a severe case of spring fever and the desire to hit the road to points north in the redwood range, especially Humboldt Redwoods State Park, the largest continuous stretch of redwoods on earth, and rich with historical associations to Save the Redwoods League. A visit to the Eel River’s magnificent redwoods inspired John C. Merriam, Madison Grant, and Henry Fairfield Osborn to establish the League in 1918. Only three years later, the fledging organization won protection for the area.

The park is also home to the world’s first RV, Charles Kellogg’s Travel Log, handmade in 1917 from a fallen chunk of a redwood log and mounted on a 1917 Nash Quad truck, the toughest, most rugged vehicle of its kind at the time. Kellogg was a vaudeville-style performer, who could, quite literally, sing like a bird , and a naturalist who became increasingly concerned about the fate of the redwoods he loved. According to a NPR story,

“From 1917-1921, Kellogg took his Travel Log on the road. He drove it across the country four times, coast-to-coast, bringing word of the redwoods to people who had never heard, let alone imagined, there could be such trees. He spoke of the accelerated logging taking place in the redwood forests, made impassionate pleas for the trees’ preservation, and spread the word about a fledgling organization looking for members. It was called the Save the Redwoods League.”

Kellogg’s Travel Log has even more interesting connections to the League. Bernice Chapman, who passed away in 2005, was a member of the League for decades. She and her partner donated the Travel Log to Humboldt Redwoods State Park, where it is housed in the Interpretive Association Building. Ms. Chapman loved the redwoods, and the League has been fortunate to be able to continue her legacy through the generous support of the Chapman Hanson Foundation, created from her estate.

Have you had a chance to see the Travel Log in person? If so, we’d love to see your photos posted on our Facebook page! 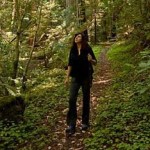 Deborah joined the League's staff in 2012 and served as the Associate Director of Development. She brings over a decade's worth of experience fundraising for conservation organizations in the Bay Area. On a foggy July night in 1850, the Baltimore clipper Frolic sailed south along the Mendocino coast, bound for San Francisco and its booming economy.  The hold of the former opium ship was filled with all the luxuries of the … Continued Have you ever seen this stunning flower in the redwood forest? It is a Giant Wake Robin, or Trillium chloropetalum, and was recently seen blooming in the Santa Cruz Mountains by our staff and our colleagues from POST. The petals … Continued

One Response to “The First RV was a…Redwood?”