On the magnificent League-owned property called Stewarts Point, the spectacular Sonoma County Coast and the mighty redwood forests are iconic elements of California’s identity. And forever intertwined with these inspiring landscapes is the cultural richness of the Native American tribes that have lived for thousands of years along the coastal bluffs and forested waterways. Here’s a look at this treasured land.

The League and our collaborators are celebrating this 870-acre property where nature and culture come together in one incredible conservation achievement, the permanent protection of Stewarts Point through an easement. Earlier this year, the League transferred the easement to Sonoma County Agricultural Preservation and Open Space District to conserve 700 acres of second-growth redwood forestland, more than 100 acres of coastal grasslands and 1.7 miles of the Gualala River. The transaction also included the transfer of an easement to the County of Sonoma for the development of a trail along the rugged coastline by 2019. Another agreement, a cultural access easement, is being finalized to grant the indigenous Kashia Band of Pomo Indians permanent access to their ancestral home for ceremonial uses. 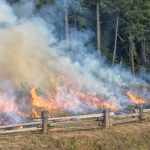 Fire is a natural part of the environment and benefits many forests. Prescribed fires have long been used to encourage growth of beneficial and native plant species and reduce the amount of combustible vegetation that could fuel catastrophic wildfires. Thousands of prescribed fires are carried out across the country every year, and they are integral to forest restoration and stewardship. T. A. Barron, a member of the Save the Redwoods League Council, is the best-selling author of over 30 novels, children’s books, and nonfiction nature books, including the Merlin Saga. He said the redwoods inspire him as an enduring symbol of conservation and are a recurring and central theme in his work.

3 Responses to “Wandering the Coastal Wonderland of Stewarts Point”