The Evolution of a Park

Save the Redwoods League was established in 1918, and 96 years later, we have quite the vantage point to look back and see how things have changed. It’s the nature of things, for people and organizations alike, that we don’t always know how our actions will impact the future. Likewise, many Californians aren’t aware of the risk and hard work that has gone in to many of the places we take for granted.

Now, the League has a nearly century-long road behind us, and it’s pretty cool to look back and see what’s happened. From our work in the early 1900s, we can see at the macro level how the League shaped the course of conservation in California; and at the micro, how we’ve pieced together dozens of individual transactions to assemble the network of special places that bring beauty to our lives.

That combination of the League’s macro and micro positive impacts really struck me on a recent visit to one of my new favorite parks. I was on my way home from meetings in Fort Bragg and took the long way home to get a dose of awe and inspiration at Montgomery Woods on the way.

Montgomery Woods State Natural Reserve is a hidden gem nestled in an elevated bowl of a valley on the eastern edge of the Mendocino County redwoods. A stunning blue stream winds through what many consider to be the most scenic redwood grove in the world, and while it is far off the beaten path and relatively unknown, it is the perfect destination for picnics, hikes and unforgettable redwood experiences.

Like many of the parks that Save the Redwoods League has helped to create, Montgomery Woods came together piece by piece, in the face of threats from logging and development. In 1945, the first nine-acre plot of land was donated, and in the years following, 24 subsequent League transactions helped this park reach its current size of 2,743 acres.

But, the League’s work doesn’t stop with protecting the redwood forest. People need to see these places and experience the inspiration of an ancient redwood grove. So from 2008 to 2010, support from League members allowed us to redesign and rebuild this park’s facilities. Before, the parking lot was too small (and landed cars on top of tree roots, ouch!), the trail was hard to find, and the park itself had no sign to let visitors know they had arrived. Now, there’s a new parking lot, information kiosk, bathroom and even a picnic area near the trailhead. Since the completion of this improvement project, park visitation has steadily increased from about 9,000 people in the year 2009-10, to over 17,000 in 2012-13.

We’re pretty proud of what awaits the visitors to this treasured park, and proud as well of the partnership with California State Parks that helped make it happen. These improvements are the kind of thing you might take for granted when you visit — and you should! Every park should have well-designed facilities for you to use without even thinking about it. They’re there to make your redwood experience as spectacular as it can be, so head to Montgomery Woods and check out its breathtaking redwoods as soon as you get a chance. Don’t forget your camera… and send us your favorite shots! 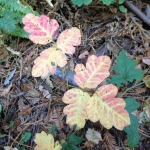 Beautiful from a Safe Distance

While the colorful display of poison oak leaves turning red in the fall is certainly beautiful among the redwoods right now, the sight is also totally frightening if that plant gives you a nasty rash! Despite most people despising this … Continued This week, our research partners from UC Berkeley braved the fall heatwave to check on how some old redwood forests are handling the drought in the Santa Cruz Mountains. I joined them among the redwood giants at Henry Cowell State … Continued