One hundred years is like the blink of an eye for a redwood tree. In the life of a nonprofit organization, however, a Centennial is a major milestone. In 2018, Save the Redwoods League celebrates a century of extraordinary accomplishments in protecting and restoring redwood forests and connecting people to their peace and beauty. A new exhibit at University of California, Berkeley, tells the story of these accomplishments, and I’m so proud that three generations of my family are part of this great story.

At the university’s Bancroft Library, the exhibit, Sustaining Grandeur: The First 100 Years of Save the Redwoods League, features letters from presidents of the United States and First Ladies, historical photos of coast redwoods and giant sequoia, artifacts and films from the past century, and much more.

My favorite is a letter from John D. Rockefeller Jr. who thanks the League and my grandfather, Arthur Connick, for negotiating the protection of the South Grove within Calaveras Big Trees State Park. In the exhibit’s 1954 letter, Rockefeller writes, “To have a part in the preservation of these majestic trees was a privilege.” He says that it’s especially meaningful to work with Save the Redwoods League, “which has so faithfully guarded these forests for many years.” Growing up, I remember my grandfather telling us stories about visiting the Rockefellers to discuss the protection of this forest and others that the family supported.

This was the second large contribution to the League by Rockefeller; the first protected the magnificent Rockefeller Forest in Humboldt Redwoods State Park. Rockefeller helped the League purchase over 9,000 acres of timberland, with matching contributions from the state. By 1931, this grove, the largest contiguous stand of old-growth coast redwoods in the world, was saved from an impending harvest and, in 1952, it was named the “Rockefeller Forest” in honor of the family’s dedication to protecting it.

It is a privilege, in fact, to help do this work, and to see the League’s 100 years of history in this exhibit is really exciting.

I can’t think of a more appropriate institution to reflect on the League’s history during its Centennial. The library holds the archives of the League and other organizations that have protected California’s natural treasures. These are some of the largest environmental archives in the country.

The university is also intertwined with the League’s historical identity. “Cal” graduates populated the League’s ranks from its beginning in 1918.

Stephen Mather (class of 1887) was the first director of the National Parks Service, an inaugural League donor and Councilor. He held discussions at the university in 1915 that led to the establishment of the National Parks Service. Mather called on John C. Merriam (class of 1892) to explore the state of the redwood forest in 1917, a trip that inspired Merriam to establish the League with two other conservationists. Merriam then served as League President for over 20 years.

Willis L. Jepson (class of 1889) was a League Councilor, and he became the namesake of the University and Jepson Herbaria, where numerous coast redwood and giant sequoia specimens are housed. Newton Drury (class of 1912) joined the League as Executive Secretary in 1919 and was chairman of the League’s Board when he passed away in 1978. And Robert Sproul (class of 1913) was UC Berkeley’s president for 28 years and the League’s Treasurer for more than half a century.

Robert E. Connick (class of 1939) earned his BS and PhD in Chemistry at Cal before working his way up to professor, dean of the Chemistry department, and chair of the Academic Senate at both Berkeley and the entire University of California system. Robert was the only son of my grandfather, Arthur, and he carried on my family’s legacy of support for the League — a legacy that continues today after three generations. Robert, known to us as Bob, served as a Councilor for the League for 36 years. His daughter, Sarah Connick, served on the League’s Board of Directors, and she is currently a Councilor.

These are just a fraction of the Cal alumni who played a meaningful role in League affairs.

“The link between the academic community and the conservation community was something that I vaguely appreciated but it was really highlighted very nicely in this exhibit,” said Kent Kirshenbaum, who came to the exhibit on April 19, the opening night. “A lot of the documents here, including some of the original letters indicating that they were sent out from the library at UC, Berkeley, really drive home the point that there has been this symbiosis between academic researchers and the conservation efforts. It’s nice to understand the fact that academics don’t necessarily have to be sitting in their laboratories. They can really be engaged in what’s going on in the field and be really engaged in some of the crucial issues that face us, including conservation issues.”

“I’m delighted to learn about women’s early roles,” said Judy Wessing, another attendee on opening night. “Women tend to be good collaborators. I’m glad that there’s a redwoods league and that someone blew a whistle a long time ago.”

Sustaining Grandeur transports visitors back to a time when the California state parks system was still in a nascent stage, nearly all of the North Coast redwoods were in private hands, and the protection of even modest portions of those ancient forests was far from a sure thing.

Recalling the efforts of those who decades ago managed to preserve the old-growth redwoods inspires me (and I hope others) to make certain that the League’s legacy is extended for at least another hundred years. If you’re in the Berkeley area, I encourage you to visit the exhibition at The Bancroft Library (external link). The exhibit is free and open to the public through August 31, 2018, from 10 a.m. to 4 p.m., Monday through Friday.

Learn more about the Sustaining Grandeur exhibit, read about the League’s history online, or view the organization’s interactive timeline. Come and celebrate the League’s Centennial at events throughout the year. 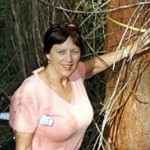 Peggy Light is a third-generation supporter of Save the Redwoods League and is currently serving as the Vice Chair on the League’s Board of Directors. She’s passionate about the natural world and loves experiencing nature by hiking, fishing and traveling.

7 Ways to Get Involved with the League on Earth Day